Yesterday FEMA announced the release of an updated National Response Framework (the fourth edition).  The most notable changes in this version of the NRF are the inclusion of Community Lifelines and a change to Emergency Support Function (ESF) #14.  Previously, ESF #14 was Long-Term Community Recovery.  With efforts to further engage and coordinate with the private sector in disaster response, ESF #14 has been changed to Cross-Sector Business and Infrastructure.

So what of Long-Term Community Recovery?  The National Disaster Recovery Framework (2016) outlines Recovery Support Functions (RSFs), which, at the federal level, are organized as coordinating structures along with the ESFs.  There are six RSFs, which generally align with the Core Capabilities for the Recovery Mission Area.  For anyone who has worked with FEMA in disaster recovery operations, you know these can be massive organizations, so why create an even large organization?  This structure should support the ESFs in focusing on immediate needs, while the RSFs can address long-term recovery.  When the Federal disaster response organization is initially set up for a disaster, the ESFs are immediately put to work to support state and local emergency needs.  In this phase, the RSFs are able to organize, gather data, and plan for eventually being the lead players as response transitions to recovery.  Recovery is very much a data-driven operation.  As this transition occurs, with the RSFs taking over, many of the ESF resources can be demobilized or tasked to the RSFs.

What does this mean for states and locals?  Fundamentally, nothing.  States simply need to have an appropriate interface with the new ESF #14.  Do states and locals need to mirror this organization?  No, and in fact most of the time when I see an organization centered around ESFs, I tend to cringe.  The ESF/RSF system works for the federal government because of the multitude of federal agencies that have responsibility or involvement in any given function.  Fundamentally, ESFs/RSFs are task forces.  Recall the ICS definition of a task force, being a combination of resources of varying kind and type.

Certainly, most local governments, aside from perhaps the largest of cities, simply don’t have this measure of complexity and bureaucracy.  It can work for some state governments, but for many it may not make sense.  Let’s consider ESF #1 – Transportation.  How many state agencies do you have that have responsibility and assets related to transportation?  In some states, like New York, there are many, ranging from State DOT, NYS Parks, the Thruway Authority, and the multitude of other bridge, road, and transit authorities in the State. Smaller states may only have a State DOT.  One agency doesn’t make a task force.  There are other options for how you organize your emergency operations plan and your EOC that can make more sense and be far more effective.  Essentially what I’m saying is to not mirror the way the feds organize because you think you have to.  All plans must be customized to YOUR needs.

While the focus of the NRF is on how the federal government will response, it is intended to be reflective of a whole community response.  It doesn’t necessarily provide guidance (nor should it) on planning, but it certainly serves as a reference.  Since it seems the feds are going all in on the community lifeline concept, I urge state, local, tribal, and territorial governments to examine how they can integrate them into your operations.  That all starts with planning.  It may begin as a function of situational awareness, but then what actions should a jurisdiction take when lifelines are impacted?  Even if a jurisdiction doesn’t have the capabilities to address the root cause, they still need to address the affects.

What thoughts do you have on the NRF update? 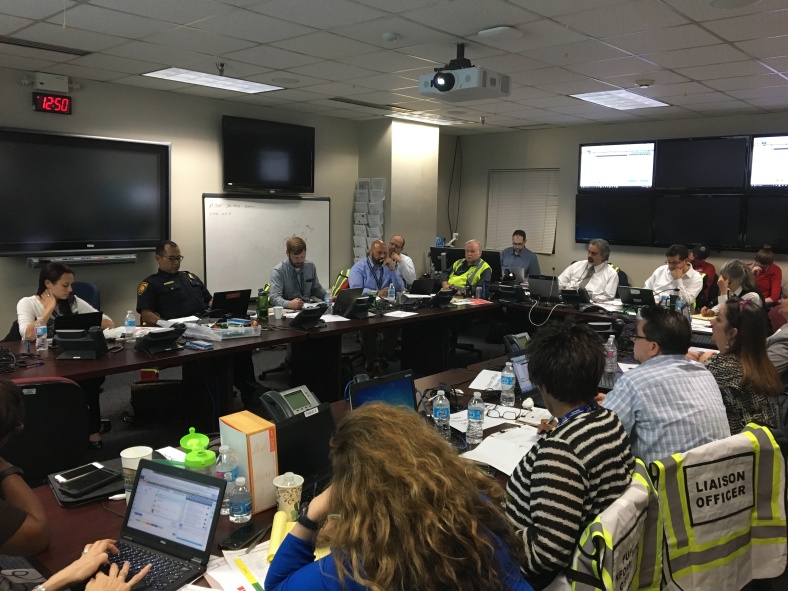 FEMA recently released a draft Operational Period Shift Brief Template for EOCs, open to public comment.  The document is fine, though there was one glaring issue… it assumes an ICS-based model is in use in the EOC.

With the release of the NIMS refresh, we were given some ‘official’ options for EOC management structures.  Unfortunately, we aren’t seeing much material that supports anything other than an ICS-based structure.  An ICS-based structure may certainly be fine, but every organization should examine their own needs to identify what works best for them.  Story time…

We recently completed a contract that included the development of a plan for a departmental operations center for a state agency.  The plan had to accommodate several considerations, including interaction with regional offices and operations, interaction with the State EOC, and integration of a call center.  When we talked to people, examined form and function, and looked at fundamental needs, the end result was an ICS-based organization.  While accommodations had to be made for translating their own agency structure and mission, it fit rather well.

For a contract we are currently working on, we are developing an EOC plan for a private utility.  Again, we reviewed documents, talked to people, and identified the fundamental needs of the company and the EOC organization.  The end result is shaking out to be something a little different.  At a glance, it’s largely ICS-based, but has some aspects of the Incident Support Model, while also having its own unique twists.  One particular observation was that their company’s daily structure has functions combined that we would normally break up in traditional ICS.  Breaking these functions up for an incident would be awkward, disruptive, and frankly, rather absurd.  Not only would personnel be dealing with something out of the ordinary, they would be changing the flow of corporate elements that have been placed together by necessity in their daily operations, which would detract from their efficiency during the incident.

My third example is a contract we are just getting started on.  This project involves developing an EOC plan for a municipality.  While we’ve had some initial discussions, we aren’t sure what the end result will be just yet.  The client isn’t set on any particular structure and is open to the process of discovery that we will be embarking on.  As I’ve thought about their circumstances and the recent and current work we’ve done on this topic, there are a few things that have come to mind.

The most important consideration is to develop a plan.  That will provide extensive benefit, especially when done properly.  Follow the CPG 101 guidance, build a team, do some research, and weigh all options.  The end goal is to identify an organizational structure that will work for you, not one that you need to be forced into.  Bringing this around full circle, we need to know that with whatever system you decide to use, expect that you will need to develop your own training, job aids, and other support mechanisms since they largely don’t exist for anything outside of an ICS-based structure.  Note that even for an ICS-based model, there are needs… consider that there is no ‘official’ planning P for EOCs (one that is less tactics-focused), and, of course, that ICS training alone isn’t enough to run your EOC by.

I don’t place any blame for this need… consider that FEMA, with finite resources just like the rest of us, tries to produce things that are of the greatest utility to as much of the nation as possible, and right now, most EOCs are run on an ICS-based model.  While I hope this will expand over time, every entity will still be responsible for developing their own training on how they will organize and respond.  No training developed by a third party for a mass audience can ever replace the value of training designed specifically to address your plans.

I’m interested in hearing what changes are being made to your EOC organizations and how you are addressing needs.