This morning my inbox was inundated with notices from FEMA and from colleagues about the release of the ‘refreshed’ NIMS, which has finally occurred at almost exactly 18 months after the draft of this document was released.  You can find the new document here.

As I’m reading through the updated document, there are a few things catching my eye:

Overall, NIMS 3.0 is a good document to move forward with.  While there are some elements that I don’t necessarily agree with, none of them are damaging to our field of practice.  While NIMS remains our core doctrine for response, what is missing from this document that we saw heavily included in earlier versions was the concept of integrating NIMS into other aspects of emergency management.  Primarily, it is something that must be prepared for.  It simply isn’t enough to include a one-liner in your emergency plans saying that you are using NIMS.  The elements of NIMS, and not just ICS, but things like EOC management, multi-agency coordination, resource management, and joint information management, need to be fully engrained in your plans.  Plans serve as the foundation for preparedness, so what is in our plans must be trained on and exercised in a continuous cycle.  I would have liked to have seen some very apparent reference to the National Preparedness Goal in this document.  Otherwise, it appears to many that these doctrine are unrelated.

What are your thoughts on the NIMS refresh?  What did they do well?  What did they miss? Was it too safe with too few changes?  Were there other changes needed to improve our coordination of incident management?

As always, thanks for reading!

I’ve always been fascinated by emergency operations centers (EOCs).  Through my career I’ve worked in many of them across the nation as a responder, trainer, and exerciser (is that a word?).  I’ve seen EOCs large and small, dedicated facilities and multi-use rooms.  I’ve been in EOCs on the top floor of buildings, so as to have a bird’s-eye view; and those underground, originally designed to withstand a Soviet nuclear attack.  I’ve seen technology that rivals NASA’s Mission Control, and EOCs that drop phone and internet lines from the ceiling when needed.  While the size, layout, and technology can all support an EOC’s mission, it’s really all about the people. 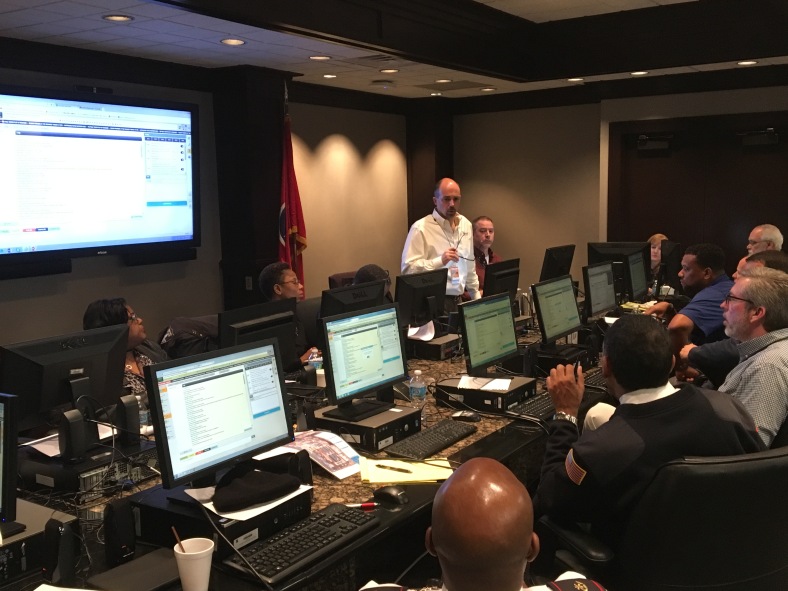 Over the past several months I’ve seen an even greater variety of EOCs due to a broad range of consulting projects I’ve led for my company.  These projects have brought me to EOCs in states, cities, and airports across the nation.  While coordination is the commonality, there are a great deal of differences between and among these EOCs, not only in their physical space, but also in how they operate.  While all pay heed to the National Incident Management System (NIMS) in some fashion, some lean more heavily on the Incident Command System (ICS) than others, while some prefer the emergency support function (ESF) model, and others yet seem to be in limbo, searching for the best model.

It’s been over a year since the National Integration Center (NIC), charged with maintaining NIMS, released a draft for public comment of the NIMS Refresh, which included the Center Management System (CMS) concept.  CMS is/was intended as a model for organizing EOCs and other such incident support functions.  Despite promises, we have yet to see any of that come to fruition.  That said, there are certain expectations and activities that must still exist for an EOC to be successful and productive.

With tactics being managed by the Operations Section in the Incident Command Post (ICP), planning is really the focal point of an EOC.  The perspective of an EOC is generally much bigger picture than that of an ICP.  Assuming a traditional coordination and support role of an EOC, the Operations Section of an EOC is really geared toward pulling agencies together and facilitating strategic-level problem solving through proper coordination.  For an EOC to function properly, current information is just as important as the ability to anticipate future needs so that problems can be solved and resources obtained.  This information management and forecasting is the responsibility of the Planning Section in an ICS-centered model, or of a planning function in any other model.

Every agency that contributes to the EOC, regardless of the model, should be prepared to contribute time and potentially even staff to this planning function.  Often, the incident is ‘routine’ enough that the planning staff are familiar with the various facets of the incident to do proper information collection, analysis, and forecasting; but on occasion subject matter experts are needed to support each of these critical activities.  Those subject matter experts often come from the agencies or emergency support functions represented in the EOC.  As forecasting is performed, opportunities are identified for needs that may need to be supported.  This is where the forecasting loops back to Operations to coordinate the agencies/emergency support functions to solve these problems.

None of this actually means that an EOC doesn’t oversee tactics, even indirectly.  While an ICP, for most incidents, doesn’t report to the EOC, there may be ancillary organizations developed to address other matters which the ICP isn’t overseeing.  While the ICP is focused on immediate life-safety issues, the EOC may be coordinating evacuation, sheltering, or public health matters.  In each of these examples, or numerous others which could be contrived, someone has to be in charge of them.  If the incident commander’s attention is focused on the highest priorities, these other matters are likely to be run by the EOC.  Typically, these would be within the chain of command of the EOC’s Operations Section or through an ESF.

I love seeing how different EOCs address problems and manage their own functions.  I’m all for creativity, but there fundamentally should be some standardization to the organization and management structure.  What’s unfortunate, however, is that so many EOCs don’t have proper plans which identify these functions or how they will be managed.  Some simply insert the phrase ‘NIMS/ICS’ into their plan, and assume that’s enough (it’s not).  Others have no plan at all.  The enemy of coordination is chaos, and if you don’t have quality plans in place, which have been trained to and exercised, the EOC stands to add even more chaos to the incident at hand.

Put some thought into your EOC management structure and plans.    How would the EOC run if you or someone else who usually runs it weren’t there?  Are plans and procedures detailed enough for it to operate smoothly?  Are personnel from all agencies trained properly in their roles and responsibilities?  Have you exercised these plans recently?  If so, what lessons learned do you usually see and have you worked to address them?